The to-go cups the dining hall staff has started putting out are super handy when you’re on the go. Just make sure they get recycled later!

If you aren’t getting enough granola, don’t worry because Proc is serving it all day every day. We don’t hate it…

granola (proc granola is back all day every day!)

If you’ve made something yummy in the dining hall and taken a pic of it (we know you have), send us the pic and the recipe and we’ll post it here, on insta, and on Facebook to share with other middkids!

This entry was posted in Uncategorized.

One dessert isn’t enough for you? Here’s three in one: ice cream, toffee bar, and chocolate chip sundae! 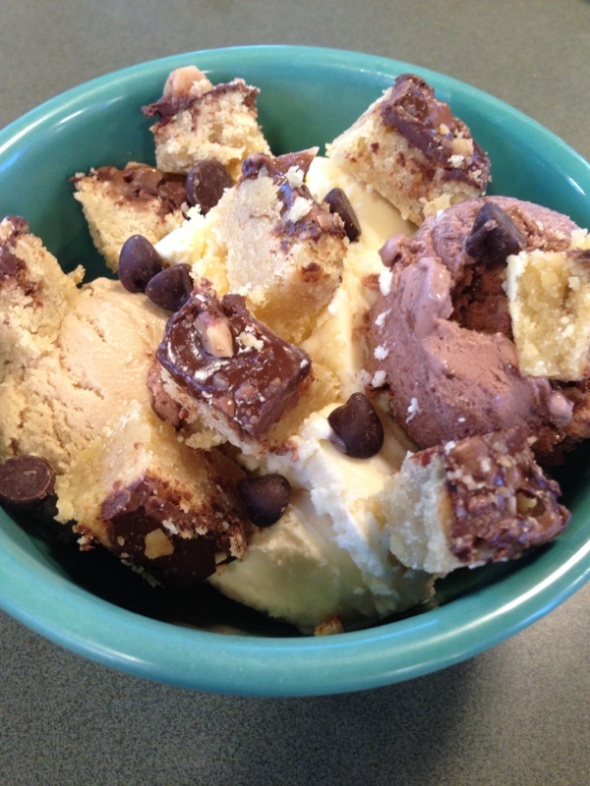 This entry was posted in Uncategorized.

A hungry little horde of freshman (er…first-years) scuttled through town some February day in 2013 in search of a restaurant called Jackson’s. When they arrived, the establishment sat quietly with no hint of movement inside. A menu in a glass case still advertised delicious sundries, but the door was locked. It turned out that Jackson’s had closed sometime before. The pod of youngins turned forlornly from the abandoned restaurant, saddened they hadn’t had a chance to taste the Middlebury legend.

Needless to say, we were quite delighted to learn of a new eatery in town occupying Jackson’s old building. We were even more excited to learn that the new restaurant was an addition to Chef Michel Mahe’s powerhouse restaurant family (Bobcat, Bearded Frog, Next Door, and Park Squeeze). Encouraged by the editors of MiddBeat to test out the new eatery, we quickly made reservations for opening day. Bundled and Bean-Booted against the cold, we trudged into town to the Lobby. In the snowy dusk, the restaurant emitted a cozy light from it’s beacon-like sign that reads “LOBBY.”

That the restaurant resides in an alley (on the mean streets of Middlebury, VT) lends to its prohibition era interior. Like a new-age speakeasy, it’s Bakery Lane’s best secret. The menu items are similarly priced to Two Bros, but we prefer the Lobby. Just inside the door, the restaurant provides a cozy waiting area and boasts a full bar with seating. The walls are dark blue and accented with clever food and booze quotes on chalkboards, hints of gold, and changing eating images projected onto a wall. The space is dimly lit, but not so dim that you cannot see your company.

Every restaurant has kinks to work out that are apparent on opening day, but we were still very impressed by our experience at the Lobby.

We think the best way to describe the appetizers is as fancy bar food. They are simple and easy to eat with fingers, but are doctored enough to be unashamedly eaten on a date.

Malted Fried Potatoes ($4) – The potatoes were our favorite appetizer out of the three that we ordered. They are soft, warm, and a little crispy on the outside – the way a fancy french fry should be. Our mistake was ordering them and also ordering burgers, because the burgers also come with a side of malted fried potatoes. If you plan on having a burger, only order them as an appetizer if you are prepared to eat a lot of potatoes.

Curry Dusted Popcorn ($2) – This snack was delicious and simple. The flavors are not overwhelming, as popcorn should never be too elaborate. It is reasonably priced and a good amount to share. We shared the bowl amongst five people and had enough.

Vermont Brie and Crackers ($4) – We found that this appetizer was overpriced. For our $4.00, we only received two thin slices of brie and five table crackers. Additionally, the Lobby has chosen to drizzle balsamic vinaigrette over the brie, which we thought was unnecessary.

Venison Maple Chipotle Chile ($8) – The chile was very impressive. It is sweet, but not cloying, just spicy enough, and very hearty. The toasted hazelnuts crushed on top of the chile added a very nice nutty flavor and lent an interesting texture.  The serving is fairly large and could be split between two or three.

We all chose to order from the beautiful list of burgers. What we learned is that the Lobby knows burgers. We did not sample from the salad or entree lists,  but were thoroughly pleased by our burgers. Three of the six burgers are made from local meats, and one is a delicious vegetarian burger. Few restaurants can boast a successful veggie burger.

Classic Burger ($11) – A truly classic burger made from local beef, and topped with american cheese, bacon, and a “special sauce.” The meat was good and flavorful, and you can’t really go wrong with bacon on a burger.

Filet Mignon Burger ($15) – The burger was delicious and juicy as one hopes when a burger boasts “filet mignon). This burger is topped with a bearnaise sauce and sauteed mushrooms, served on a caramelized onion bun.

Turkey Cordon Bleu Burger ($11) – This burger is like thanksgiving in a bun (a cranberry oat bun).  Gravy, brie, and bacon were yummy additions to the burger, but the turkey burger itself was dry and a little underwhelming.

Moroccan Spiced Lamb Burger ($16) – This burger was very impressive. The harisa yogurt and mint pesto worked very well together. The overall burger, made from local lamb meat, was juicy, flavorful, and very satisfying.

We are almost positive that the dinner menu does not list the desserts solely to see diners’ reactions when servers list the options. We limited ourselves to two desserts, but could have easily and happily eaten all of them.

Grown up milk and cookies – A brownie sliced in half horizontally and filled with vanilla mascarpone cheese. Served with a glass of 2% milk in a brandy glass. It was yummy, but the brownie was a bit dry and needed more mascarpone in the middle. We loved the plating.

I made a big mistake back in J-Term…I decided I was going to give up dessert for a while. Since then I’ve been looking for alternatives to satiate my sweet tooth. It’s not easy because nothing tastes like sugar except for…well, sugar. This snack is really yummy, though, and it’s easy. It tastes a lot like the filling of an apple pie, but it’s cool and crunchy…and not pie.

How to: Slice your apple into your preferred snacking size. We to do thin vertical slices so that when you’re done the apple looks like a rectangular prism, and then cut the slices in half. It’s also good in cubes. Put your apples in a bowl, drizzle a little honey over the top, and sprinkle some cinnamon. Mix the apples until nicely coated.

and you can check us out on MiddBeat! 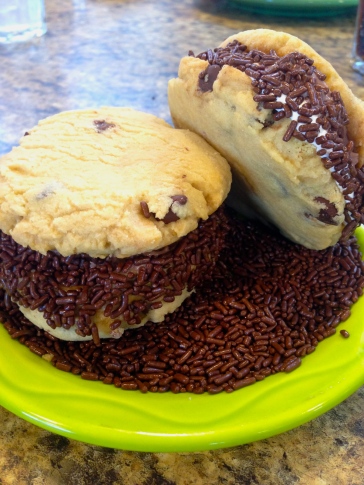 When given cookies, make ice cream sandwiches! We experimented with some different combinations for our sandwiches, using peanut butter in one and fluff in the other. You could also combine the two!

fluff or peanut butter or both

sprinkles… they were out of rainbow today 😦

and you can check us out on MiddBeat

This is a sweet little panino. It’s a gooey, toasty dessert…but you could have it any time of the day and call it whatever you want. It has all of the goodness of a Reese’s peanut butter cup, but it’s a sandwich so it doesn’t count as candy…in case you crossed that off your list for Lent.

a little bit of brown sugar (or cinnamon sugar)

chocolate chips (and/or white chocolate if you please)

How to: toast the bread slices. Spread a little butter on either side and sprinkle on some brown sugar or cinnamon sugar. Add chocolate chips in between the slices and press until melty. Do not put peanut butter in the panini press so that they are still safe for students with peanut allergies to use. Cut your panini in half, spread some peanut butter on one half, and fold over. If you’re really feeling dessert, add a little vanilla ice cream.

and you can check us out on MiddBeat.

This sandwich is appropriately named because Proctor only serves lox a few times a year and they’re gone when you blink. Ben Harris ’16 put together this monster sandwich, and we hope

Proc serves lox in the near future so we can try this one out!

How to: Toast your bagel. Pile a Proctor omelet and lox to your fancy. Dig in and enjoy.

and you can check us out on MiddBeat

Death of a Purple Dinosaur

Thanks to Claudia Esteva (’15) for her delicious breakfast combo! We can’t think of something that would be better than this to kick-start the day. 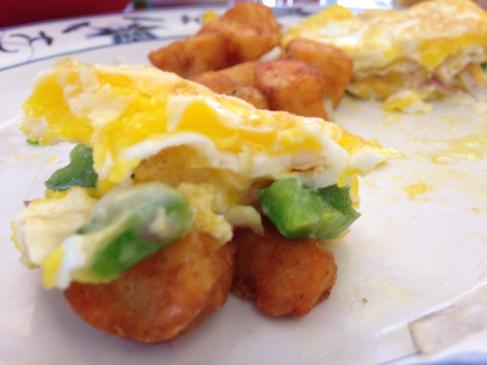 How to: start with a base layer of seasoned potato cubes and layer your eggs on top. Cover with green peppers, cheese, and onions and put in the microwave for a 20-30 seconds so that the cheese melts nicely. Enjoy!

You can submit your recipe to Proctor Doctor nomnommidd@gmail.com

and you can check us out at http://middbeat.org

This entry was posted in Uncategorized and tagged breakfast, noms, proctor.

Just when you thought Chicken Parm Day at Proc couldn’t get any better, we showed you this. One chilly February day, Jose Renderos ’16 married two familiar cheesy delicacies, and the Chicken Parmedilla was born. This baby (heh heh…sorry) is a a tortilla filled with cheddar cheese, ham, peppers, and a piece of the beloved chicken parm, grilled in a panini press.

How to: layer the ingredients on one side of the tortilla and fold over. Grill in panini press until the cheese is nice and melty. Pick your sides and enjoy.

P.S. Proctor just got new panini presses and people say they grill faster than the past ones. Can you say, “I guess I can stop cutting people in line for the panini press now”?

You can submit your own recipe to Proctor Doctor nomnommidd@gmail.com

and you can check us out on http://middbeat.org

Big thanks to Karlo Skarica ’17 for this gorgeous sandwich idea (the Karlo-declared Pollos Hermanos). This panino is not for the herbivorous or those shy from spicy peppers. It’s like…a bad ass, protein-packed, make-your-mouth-water, superhero sandwich.

How to: We recommend toasting the bread slices first. Once out of the toaster, place cheese slices on either side of the bread so that when it melts in the panini press it holds everything together. Add other ingredients in your preferred ratio and place in a panini press until your panino achieves desired meltiness. Enjoy! Thanks, Karlo!

You can submit your own recipe to Proctor Doctor nomnommidd@gmail.com

and you can check us out on http://middbeat.org

This entry was posted in Uncategorized and tagged lunch, noms, panini, pollos, proctor.